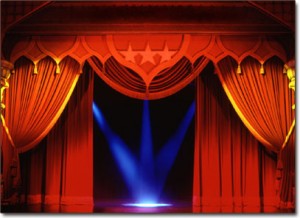 If you really want to succeed in sales, then you had better be ready for opportunities when and where they appear. Simply stated, to find prospects and to find referrals you need to be always on stage. Think of how many times you may have missed an opportunity because you weren’t ready for it; it was right in front of you and you didn’t even see it.

Always being on stage, doesn’t really take much effort. The only tools you need would be a business card, a pen, and peripheral vision; being aware of what’s going on around you.

We attended an HR business meeting in Las Vegas, and one of the main topics was recruiting for talent. One morning session focused on where do you find prospects that provide extraordinary service? During the 15 minute break the attendees did the typical things including making phone calls, picking up messages, making travel arrangements, hovering around the coffee and cookie table, and conversing. However one recruiter was not to be found during the break. The fact of the matter was he was in the lobby and the check-in desk handing out his card, and getting the name, phone number and email address of one of the guest service hotel employees. On his way back to the meeting room he stopped by the hotel restaurant he had dined at the previous evening to arrange an interview with his service provider. Both of these individuals (prospects) had proved exceptional service. So while the room full of HR people and recruiters were talking about what to do, this recruiter was actually out there doing it. It’s no wonder that this recruiter led his division in quality candidates being hired and promoted. And he led his division for the total number of referrals being submitted.

So finding prospects and referrals is not rocket science. It simply takes a little common sense, and a lot of awareness of what’s happening around you. Sometimes the person you are focusing on may not be interested in the opportunity, however they may know of someone who is, and this referral could be the very person you are looking for.

I remember recruiting an outstanding executive for an area we were expanding into. We were very excited to have him join our team in this new and very important east coast market. Immediately after the interview both he and I knew it went very good. And he said, “Bob, the person you really want on your team is…..” and he provided his name and number. About one-half year later that person joined our team and rose to a very high level within the company.

When you are on stage and open-minded to opportunity, along with good peripheral vision, finding prospects and referrals become a way of life.