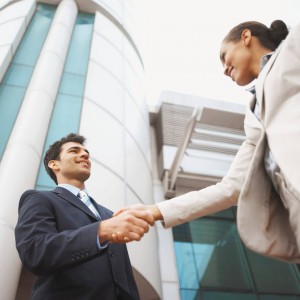 Henry Ford said “if you think you can, or if you think you can’t you’re right.” Either way you are right. The only difference is what you think, or your attitude. In sales as in life a lot of people just give up and quit because they think they can’t accomplish their goal. It makes no difference if it’s about losing weight, getting a promotion, or making a sale. So the fact that so many people simply give up, makes it that much easier for those who continue to plod forward to achieve their goal. Imagine how much would not have been achieved, if those trying to achieve it just quit trying. On the other hand imagine how much could have been achieved if those who quit, just gave it a little more time, or continued the effort, or tried something different.

Your selling attitude is what makes the difference between making the sale and not making the sale. I’m reminded of the story about the door to door vacuum cleaner salesman. At the end of the day he had one more door to knock on. As he drove up the hill towards the house, he said to himself, ‘why go up there, they’re probably not home,
and if they are at home, they probably won’t answer the door, and if they do answer the door they probably don’t need a vacuum cleaner, and if they need a vacuum cleaner, they probably won’t buy one, and if they do buy one, they won’t buy one from me.” As he knocked on the door, a kindly older gentleman opened the door and said, “Hello young man, what are you selling today?” and the salesman said “nothing that you want, and if you did want it, I wouldn’t sell it to you anyway” and went back to his car and drove away.

We let our minds play a trick on us. We come up with all the reasons why somebody won’t buy something, or why we can’t sell it. In essence we are talking ourselves out of the sale. Basically our selling attitude is working against us. What we need to do is let our selling attitude work for us. If we are not going to make the sale, let someone else tell us that, let’s not tell that to ourselves.

Your selling attitude provides the fuel for endurance and perseverance; it keeps you pushing towards your goal. In the movie “Dumb and Dumber”, Jim Carrey asks the girl he is pursuing “What are my chances?”, and she responds “One in a million” and he thinks about it for a moment, and he begins to smile and emphatically say “YES”. Now that’s they type of selling attitude we need to adopt and internalize if we want to be successful in sales or any endeavors in our life.

You have to believe you can do it. There is a mock-Latin aphorism
“Illegitimi non carborundum” which means “Don’t let the bastards grind you down”.
The way to do this is to truly internalize a ‘can-do’ selling attitude. It’s your choice, as Henry Ford said ‘If you think you can, or if you think you can’t, you’re right.